“Looking for cookware recommendations for the Travato – any ideas?”

“Hello Group! I am buying an Airstream Interstate. I want to buy dishes and pots and pans before I pick it up. Any ideas?

“We are bringing our new 2018 K home in a few weeks and I’m preparing to outfit the galley. Any suggestions. I’d like to use real dishes, but I’m afraid they’ll rattle around. Very excited.”

If you ordered a van and need to wait weeks to pick it up it is easy to get carried away and order the ultimate set of kitchen items. On the other hand you can resist that urge and once you get the van head over to a big box store to get the basics. Or you can go the middle way, which is what I did, and order the key items that were important to me.

Keep in mind that cooking in a van is nothing special. If you have a cookset and dishes from your car camping days you can use that. A simple frying pan, one sauce pot, and some picnic plates from Walmart will also work. There is nothing fancy that you actually need. That said, there are some kitchen/galley items that repeatedly get recommended in the various vanning forums. I am simply consolidating those recommendations here.

By far, the most recommended cookware mentioned in van forum posts is the Magma Nesting Cookware. They sell a number of different models. The 7 piece consists of a 2 qt. sauce pan, a 5 qt. pot and a 10 inch frying pan (plus lids and a handle). The 10 piece adds a 1.5 qt. and  a 3 qt. sauce pan. There are sets that are induction ready and some with a non-stick coating. People love the fact that they all stack together in the stock pot making the set easy to store. They also like the quality and durability. Many people with the 10 piece set leave part of the set at home (“ordered the Magna set, but found it had way more pots than I actually needed for two of us”) People with the uncoated sets report that the pans stick when sauteing. “I have a separate ceramic non-stick pan for pancakes.” 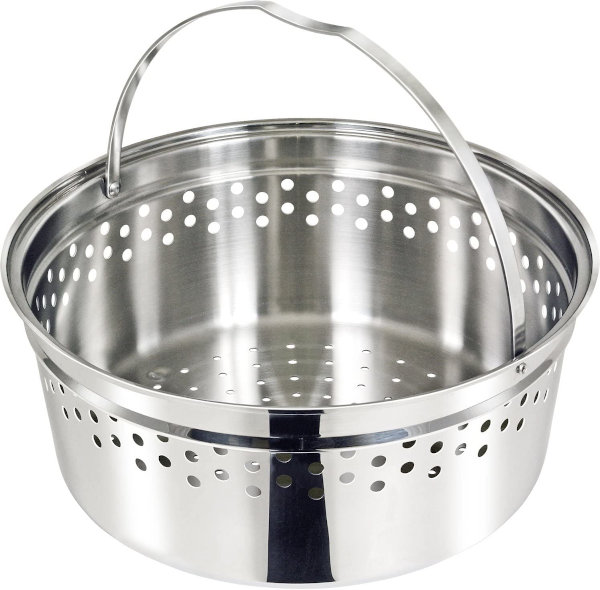 A nice addition to the set is the Magma Nesting Stainless Steel Colander which people use both as a colander and as a  steamer. It can nest inside the cookware set but it raises the lid increasing  the overall height and preventing the set from being stored in some overhead van bins 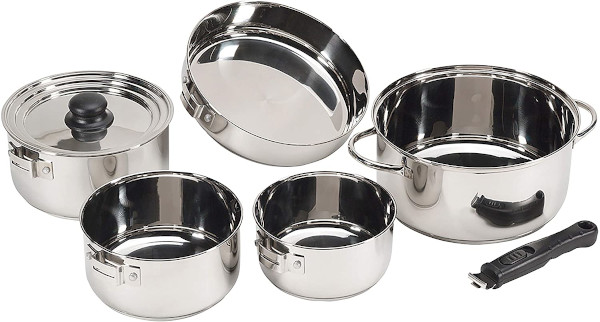 This nesting set is a fraction of the cost of the Magma (around $55). In contrast to the Magma 7 piece which has 2 pots and one frying pan, the Stansport 7 piece features 4 pots: 1 qt. 2 qt., 3 qt. and 4 qt. and a 10 inch frying pan. This set is stainless steel and has a triple ply bottom, similar in quality to my home pots and pans. For some reason this set is not mentioned much on van forums. Common complaints are that it only has one common lid for the 1, 2, and 3 qt pans and only has one handle shared among the pots and frying pan. This is the set I own 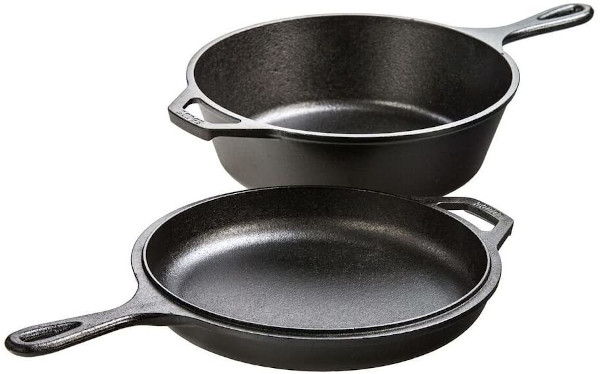 As nature photographer and YouTuber  Mandy Lea says “Number one in any camping situation has got to be cast iron pans [and] the number one brand in cast iron pans … is Lodge.” Cast iron is equally at home, cooking in your van or outside on a Coleman stove or campfire. In fact, there is no better choice for cooking on a campfire than with cast iron. The frying pans in the Magma and Stansports sets mentioned above are great, but when you need more space, for example, for a stir fry, a cast iron skillet is the way to go.  I have the Lodge Combo Cooker, which is a 3.2 quart deep skillet and dutch oven. It has plenty of room for making stir fries for two. Others prefer  having a traditional Lodge skillet and an adorable yet functional small Lodge Dutch Oven. Don’t forget the extremely useful Lodge Pan Scrapers. If you never cook outdoors, you might not find having cast iron cookware useful. 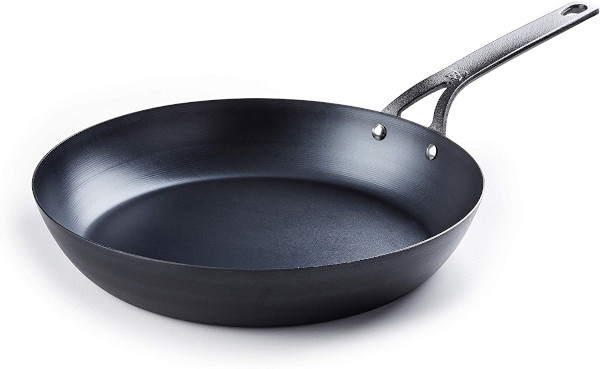 Like the cast iron concept but don’t like the weight? You might consider its lighter brother, carbon steel. Carbon steel is thinner than cast so it doesn’t retain heat as well, but the benefit of that is that it adjusts to temperature changes faster. Carbon Steel cookware tends to be more expensive than cast iron. That said, I’ve had a cheap $20 carbon steel wok for years and it has been my go to pan for stir fries, Thai fried rice, and green curry. I love the thing. The wok is small by wok standards — 12 inches by 3 inches high. Still it is a bit too bulky for me to carry in the van. My solution is an 11 inch carbon steel skillet. I prefer the BK Cookware Black Carbon Steel Skillet, which I like because it has high sides (easier to cook stir fries in). Others prefer the Lodge 12 Inch Seasoned Carbon Steel Skillet (better for searing meats). The Lodge has lower sides, which might be fine for your style of cooking. It has a rough finish, reminiscent of cast iron and unlike my wok. Carbon Steel is definitely not as popular as cast iron among the Class B camper van crowd, so you will be in the forefront of the carbon steel crowd.

There are wildly different opinions about dinnerware in Class B vans. And there are a lot of trade-offs. Some opt for paper plates to conserve cleanup water, but that is not an environmentally friendly choice. My preference is with enamelware but here are the most popular options mentioned in van forums. 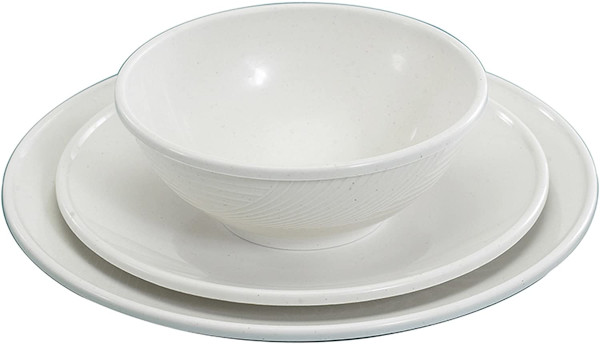 A popular choice among van owners is to use reusable plastic plates such as those from Nordic Ware. The benefit of plastic is that it is unbreakable and they don’t rattle when traveling. However, there is some debate as to the health safety of any plastic so some avoid it.

In a YouTube video, photographer and RVer  Mandy Lea, a person I mentioned in the cast iron section above (and who I think is absolutely fantastic), recommends Melamine dinnerware and, in particular this set, saying that melamine is durable and virtually unbreakable. Both of these are true and melamine is an extremely popular choice for any RVer including those in a van. If melamine makes you happy, go with it, but here are my concerns.  Melamine dishware is made from a resin of melamine formaldehyde and. When you eat food from a melamine plate, some amount of the chemical melamine migrates from the plate into your body. While the E.U. is considering banning melamine dishware, it is considered safe by the United States FDA with this caveat: “Foods and drinks should not be heated on melamine-based dinnerware in microwave ovens.”[FDA] This is because the amount of melamine that migrates from a dish to a person increases as heat increases and as the food becomes more acidic. In an article published in The Journal of the American Medical Association Internal Medicine, Dr. Chia-Fang Wu found that the dinnerware released high quantities of melamine into people who were using melamine bowls to eat hot soup [2013]. Melamine is not a benign chemical. An article in the journal Science describes a case where 53,000 children were hospitalized due to melamine tainted infant formula powder [2008] and there are adult cancer risks according to the International Agency for the Research on Cancer [2017][WHO]. In addition, the manufacturing of melamine is bad for the environment [2010]. In summary, why risk it when there are much safer options such as enamelware described below and silicone dishware for microwaving. I apologize for this long rant. 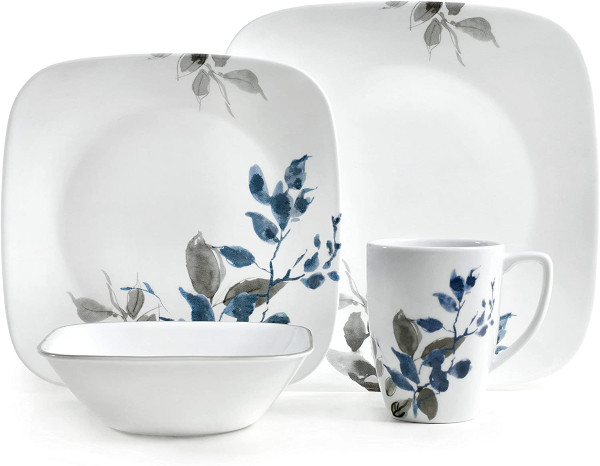 Another very popular option is Corelle, which from a health safety perspective is significantly better than plastic. People like Corelle  because they are “real dishes”, are break resistant, thin,  and lightweight.  Plus you can use them in a microwave.  Although they rarely break, when they do it is a mess “Corelle dishes were a disaster in our RV. They are made of glass, not ceramic or porcelain. Every time we broke a dish we would find small, very fine shards of glass throughout the van for weeks after. We broke most of them. On one notable occassion [sic] the cupboard door sprung open in hard cornering, the dishes hit the floor and all but one shattered.” – Murray, Lorri, and Clara.  Others have echoed this experience although most say they are unbreakable. 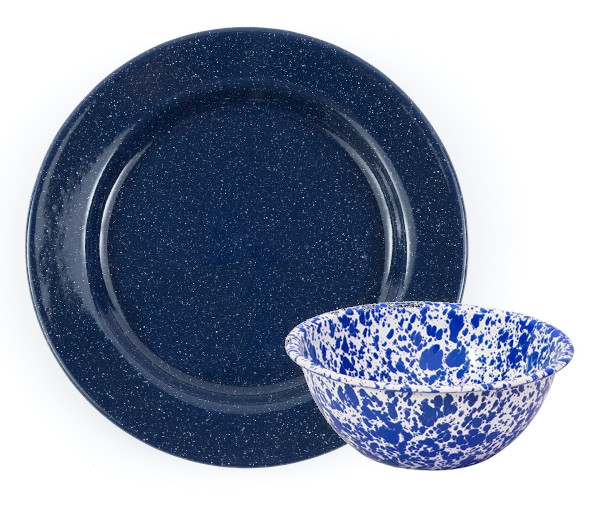 Since the 1910s, enamelware has been associated with recreational vehicle camping. (For a fascinating glimpse of early RV days see George Lorando Lawson’s “An Automotible Praire Schooner” Country Life June 1908). From the traditional speckled pattern to more modern designs, enamelware is a great choice today. Healthwise, it is safe to use and it is unbreakable. Enameled dinnerware is thin and attractive. The drawback is you cannot use them in a microwave. Also since metal transfers heat better than other material, an enamelware bowl of hot soup will be, well, hot. You can buy a lower quality enamelware 12 piece set for under $30 online or at a big box store, or, expensive elegant enamelware from Falcon, one of the original manufacturers. The best from a price-to-quality perspective, and the one I recommend is Crow Canyon. 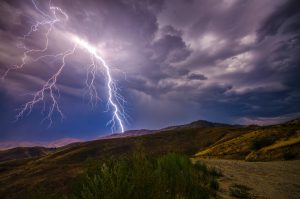 The best surge protector and EMS